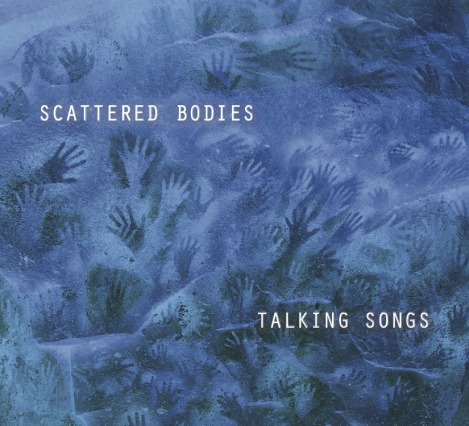 “…an extremely enticing mix that recalls the Doors-ie side of Television…a rhythmic, eccentric, and almost jazz-like adventure” Tim Broun, Stupefaction

Scattered Bodies: an art punk innovator teams up with an award winning firebrand poet and a world-wise songstress. Their sex and death themed album Talking Songs is moody and rhythmic, laced with humanity, and filled with dark and humorous imagery born out of a life lived hard.

Award winning writer Brian Brett supplies the words for Scattered Bodies, and shares vocals with composer Susheela Dawne. Producer Andy Meyers built the tracks by sampling his Toronto art punk band The Scenics, renowned as one of the few Canadian first era punk bands who bring to mind groups like the Velvet Underground and Television. Produced at Allowed Sound Studio, Talking Songs was released on CD/digital by Dream Tower Records on February 25, 2014.

Meyers: “The music on Talking Songs is sampled from fly-on-the-wall Scenics recordings circa 1976-82. I created songs by setting these samples — rhythm, melody and noise — into drum loops from recent Scenics sessions. Then Brian wove his subversive, darkly funny words into the music. Susheela, a powerful writer/performer who always gets to the heart of the matter, chose some of Brian’s texts and created her own sophisticated melodies. With her tracks, we added samples after the songs were created. Susheela and Brian’s voices are richly complementary: strong, humane, layered with subtext, her smoky voice providing the ideal feminine counterpoint to Brian’s resonant baritone.”

Meyers produced The Scenics CDs How Does it Feel to Be Loved (“Top ten of 2008”, J Morgan, Village Voice) and Sunshine World (“New York had Talking Heads but here was their equal in Toronto” Bob Mersereau, author “The Top 100 Canadian Albums”.) He recently co-produced The Scenics’ reunion album, Dead Man Walks Down Bayview. (“Their strongest material…This is a band that deserves to be heard.” Popmatters).