Born in Vancouver in 1950, he studied literature at Simon Fraser University from 1969 to 1974. Writing and publishing since the late 1960s, he has also been involved in an editorial capacity with several publishing firms such as the Governor-General Award winning Blackfish Press.

In the early seventies, he began working as a free lance journalist and critic for various publications and newspapers, including The Globe and Mail, The Toronto Star, The Vancouver Sun, The New Reader, Books In Canada, The Victoria Times-Colonist, and The Vancouver Province — where he was the poetry critic for two years, and had his own column. His journalism has appeared in almost every major newspaper in Canada, and his essays in most of the major magazines. He wrote a monthly newspaper column called CultureWatch for twelve years for the Yukon News. Brian Brett inaugurated the B.C. Poetry-In-The-Schools program in 1974, introducing children in schools to world poetry for a period of several years, and has taught or given workshops on writing across Canada. He has been a member of organizations ranging from P.E.N. International, The League of Canadian Poets, the B.C. Federation Of Writers, to the Writer’s Union of Canada. While a member of the League of Canadian Poets he performed a National Reading Tour under their auspices. He has also given readings on the CBC and various other media as well as public performances funded by private organizations, universities, Harbourfront, Vancouver International Writers’ Festival, Saltwater Festival, Sechelt Writers’ Festival, the Calgary/Banff Writers’ Festival, LitFest, the Calgary Spoken Word Festival, the Calgary Writers’ Festival, the Winnipeg Writers’ Festival, National Book Festival, and the Canada Council. In May 2005 Brian Brett became the Chair of The Writer’s Union of Canada.

Brian Brett is the author of 13 published works in fiction, poetry, and memoir, and has been a journalist for forty years. He is also the author of two CDs of ‘talking songs.’ He has been published in 24 Anthologies, as well as numerous fine-print broadsides and folios, magazines, and newspapers too numerous to mention. He currently lives on a farm with his family on Salt Spring Island, B.C., where he cultivates his garden and creates ceramic forms. 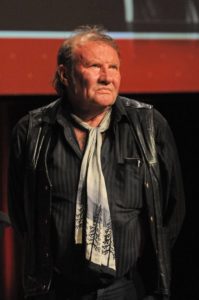