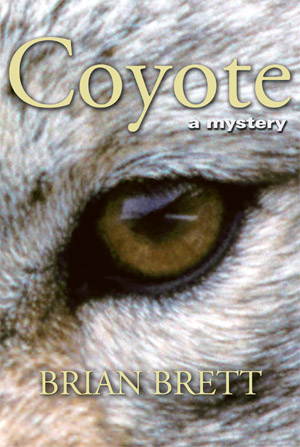 “The poet collides with the cop! In this new epic, Coyote, Brian Brett has sliced and diced the genres of fiction and created a unique, philosophic novel full of picaresque oddballs and environmental monkey wrenching.” — William Deverell

THERE WAS A MAN who called himself Coyote. He blew up bridges to clear-cut logging sites. He liberated zoos, and torched shopping malls in the night. Then he died, twenty years ago, in a botched factory sabotage. Or did he?
A terrifying and troubled ‘Brian’ doesn’t believe it — he’s come to Artemis Island to find a ‘retired’ Coyote, and kill him. It will be one of several murders.
There was a man who sat like a Buddha atop his tree house, seeking atonement for his crimes. There was the daughter of a junkie hooker. There was a sweetly anarchic island filled with eccentric islanders, as well as a rock that danced, and a saucy, hard-drinking parrot, and the strange, damaged boy for whom this novel was written.
There was a R.C.M.P. Inspector called Janwar Singh who was poised to become the chief of Homicide. Or was he? His troubled stomach doesn’t think so. Wren Dancing, the New Age healer on Artemis doesn’t think so either.
In this dazzling “ethical thriller” novelist and poet, Brian Brett, and a wildly unreliable narrator employ every trick in the storyteller’s arsenal, dancing us from slapstick to horror, from love to treachery, from Godel’s Proof to oyster hunting, from high comedy to lyric portraits of one of the legendary Gulf Islands, all the time engaging in a wicked argument with the reader and the world we are losing.
When do the means justify the end? When do the means become the end? How do we live in the world without causing damage? Does the real ecology mean destroying the planet? Why should little children die?
A trickster novel, Coyote, explores the false logic of environmental terrorism, and the even crazier logic of the pathological killer. Never have ethical arguments been so much fun, and never have they encountered such scary monsters.
14 years in the writing, Coyote is as full of surprises as the natural world we live in. Brett is even more dangerous than an eco-terrorist like Coyote, because his weapons are stories.

The hunt is afoot, the stories all converge…

With his new novel, Saltspring Island poet and novelist Brian Brett has created a postmodern, Gulf Island-based, Buddhism-infused, eco-psycho-killer thriller. Coyote is at once leisurely paced and thrilling, thought-provoking and humorous, character-focussed and intellectually challenging.
Coyote begins with the arrival of Brian on Artemis Island, an imagined amalgam of a number of B.C.’s Gulf Islands. He’s searching for Charlie Baker, an eccentric back-to-the-lander who lives in a treehouse, and who Brian believes may be Coyote, an eco-terrorist responsible for a series of sabotages, fire-bombings, and explosions, presumed long dead in an action gone awry. Brian’s arrival is closely followed by the arrival of RCMP Inspector Janwar Singh, investigating the mysterious disappearance of a Vancouver environmentalist from a holistic healing centre. The novel incorporates elements of police procedurals, a departmental investigation, race and gender issues, and the hunt for two serial killers, all set against the bucolic island backdrop.
Coyote’s effective plot twists are resolved by a convincing ending. …Brett also convincingly evokes the Gulf Islands with closely detailed observations of the natural world and a population of ex-hippies, cottage crafters, dope growers, and renegade goats and peacocks. His characters, particularly Singh and the deceptively clever Charlie, are well drawn and convincing, while Brian remains a satisfying enigma who only gradually reveals his secrets.

Charlie Baker’s treehouse overlooks his sprawling garden, untidy pond and immovable boulder on one of British Columbia’s lesser Gulf Islands. On his perch Charlie sits zazen, keeps goats and patiently lets root maggots eat his broccoli.
Charlie may or may not be Coyote, a famously dead — or merely quietly retired?— ecoterrorist, who half a lifetime ago bombed dams and released zoo animals till one escapade ended in violent tragedy.
Charlie’s cantankerous parrot isn’t telling, and no one else on Artemis Island cares to know.
Then Rita, the old man’s onetime lover, goes missing, and a slimeball called Brian tracks down Charlie to tell him this and pry out his story, ostensibly to research a book.
Weave in anxious RCMP Inspector Janwar Singh who is sweating through ugly office politics, Elvira and her young son Festus who has a rare disease that causes premature aging, chakra-tuning whole-body healer Wren and a handful of predictably unpredictable outer-island dwellers and we have Coyote: A Mystery…
Don’t rush to clear a space on your bookshelf next to P.D. James.
Coyote: A Mystery is primarily an ambitious literary novel which gives a wry, knowing nod to more mundane works in the skull-and-dagger section.
“If a story has mysteries, as any good story should, we need to have them investigated, and for that we need investigators,” Chapter 2 opens, introducing the “token twins,” harried Janwar Singh and upwardly mobile Corporal Kirsten Crosby, who are assigned to investigate a disappearance.
Rita is the latest person with ecosympathies to disappear or die horribly.
Another woman’s hands were held in a fire until the bone charred before her rape and murder. Her assailant seemingly wanted to know someone’s whereabouts.
And then a screed of madly violent apocalyptic prophecy falls into police hands. The story rolls on.
Coyote is leavened with first-person monologues addressed to Charlie’s young friend Festus by Brian, whom Charlie promptly and rightly tells, “You’re an evil son-of-a-bitch.”
This and other literary legerdemain make Brian — whom we’re playfully invited to believe is author Brian Brett’s evil spiritual twin, or maybe just a fictional Brian pretending to write his own improbable book — a thoroughly and unrepentantly unreliable narrator.
Brian the slimeball soon tells Charlie that he thinks he’s the legendary Coyote and threatens to turn him in, or worse.
“You tell me everything you know and I write a novel, a fictional work that describes the location of this scene on a godforsaken island never discovered, the history so warped that no one will know if it’s real or imagination. “I walk away with my story and you grow your garden and talk to your parrot. How’s that?”
“Are you an artist?” Charlie asks.
“Yes, I am.”
“Is art blackmail?”
Passages like this led me grinning from page to page. Many others I found deeply moving as Coyote plummets headlong toward its conclusion. British Columbia’s Gulf Islands have always been a grand place for keeping dark secrets.
Of course every literate islander from Saturna to Cortes will be chin-wagging about the uncanny resemblance to his or her own island, and for good reason.
…
As Charlie’s parrot says, “Watch that hawk, roll that rock.”
…
Unfortunately, I read a borrowed copy of Coyote, so now I’ll have to buy my own. I’ll pay whatever it costs for the last three paragraphs alone. No cheating! Don’t flip to the end. This book is worth the reading journey.