Night Directions for the Lost (CD)

The Talking Songs of Brian Brett 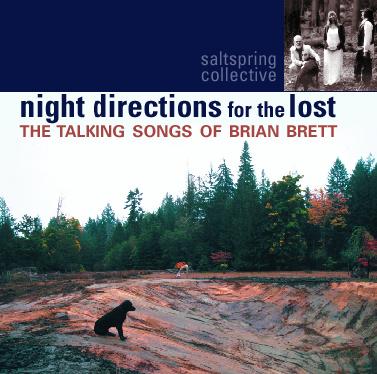 “There be such diverse stories in the world, it would take a multitude of voices to speak them” ~ The Venerable Bede

“No direction but everywhere. Is everywhere a direction?”
~ The Master Calligrapher

“It’s a wonderful, wonky work. There’s nothing like it in the world of spoken word. A homage to variety, a nod to Kurt Weil, Philip Glass, Paul Revere and the Raiders, Celtic ballands, John Truddell, and Kenneth Rexroth doing jazz at the Nighthawk, with a bit of a rough edge and a latin/grunge punky flavour, spiced with a lot of irony and angst and celebrations.”

“Brian Brett manages to sing without actually singing in these aptly named ‘talking songs’. He’s one-third of the Saltspring Collective, and his veteran poet’s voice meshes perfectly with an eclectic mix of music ranging from Beat jazz and traditional folk to Celtic and Asian influences provided by Susheela Dawne and Ramesh Meyers.
From jeremiads like “Neruda’s Dead Flower” to the comic-jazz “Two Old Ladies” and the hilarious poetic rant “May-yo”, Brett is in top form, but it’s nice to hear Dawne’s voice used extensively as well. Meyer’s professional production makes this another CD that really shows what poetry and music can do together.” ~ Vancouver Sun, November 22, 2003

The Poems (lyrics and mp3 sample) 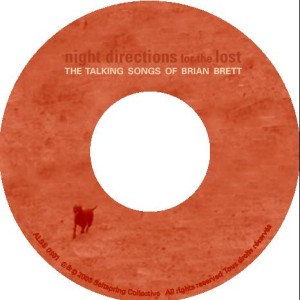 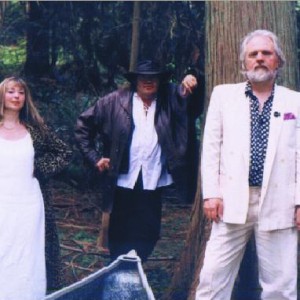 Fragments
Evening Moves
Neruda’s Dead Flower
Blue Heron Moon
Single Crow in a Deadly Sky
Another One in the Oven
Two Old Ladies
May-yo
The Swimming Hole
Bruja
The Master Calligrapher’s School
Praise of the Cheap Hotel
When I Lie With the Dying Lamb
Real Life (can you imagine it?) 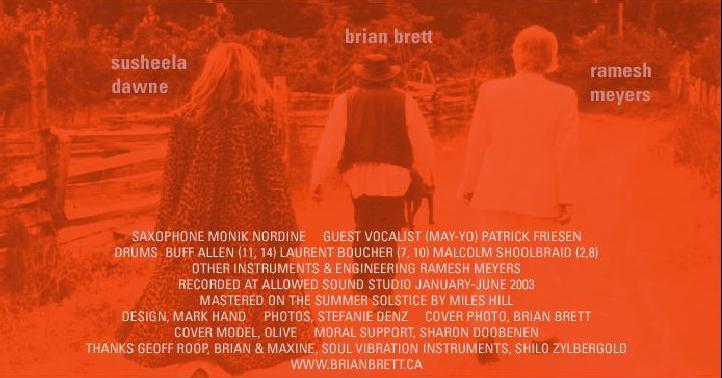